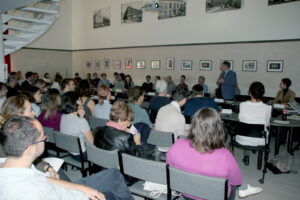 The first section, chaired by Sára Simon, dealt with the social scientific application of automated text analysis. In the first lecture, Renáta Németh talked about the aim of the research group and the positions of the new methods in social sciences. Ildikó Barna and Árpád Knap detected various types of antisemitic narratives in antisemitic articles and comments, some of which are not measurable by surveys. Zoltán Kmetty and Julia Koltai focused on word embedding NLP models; in addition to presenting the methodology, they demonstrated the potential of application for social scientists with concrete examples. Domonkos Sik and Fanni Máté talked about the results of their research on the framing of depression in online forums, including the benefits and difficulties of human annotation. Eszter Katona and Fanni Máté, in the last lecture of the section, detailed the methodology of supervised teaching models in the same research.

In the second section, Gábor Palkó talked about the analytical possibilities of a semantic prosopographic (collective biography) data network they built, called HECEdata, which can be examined together with the data elements of WikiDATA. Then Balázs Indig argued for the scientific necessity of using webcrawlers, and introduced the process step-by-step, in the case of humanities and social scientific applications.

The third section was chaired by Kinga Szálkai and opened by Nikosz Fokasz. In his presentation, the professor spoke about Hungarian and Greek auto- and heterostereotypes, and networks, based on identities and newspaper articles. The second lecture of the section was given by Pál Susánszky and Márton Gerő on the analysis of the police database on protests in Hungary, which they supplemented. The last presentation of the section and also the whole workshop was held by Erzsébet Takács and Flóra Takács. They put the previous presentation into a larger context and unfolded the traditions and problems of domestic movement research and the instruments of demonstration.

The presentations (in Hungarian) can be found here: